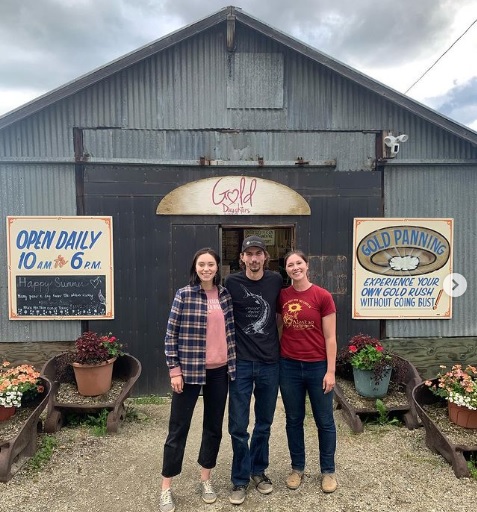 Experience real Alaska gold panning, be a part of the living history of Fairbanks and make memories that will last a lifetime. At Gold Daughters, you will learn how to pan for gold using real Alaskan “paydirt”. We play by the rule “finders keepers”, so you get to take home everything you find!

Your day starts with a bag of paydirt from Fairbanks Gold Co. You can then pan all day from piles of paydirt that we’ve hauled in from a local operating gold mine.

There’s more than guaranteed gold… you also have the chance to uncover ice age fossils and cool minerals. It is not uncommon to find pyrite, quartz crystals and garnets. We’ve even had people walk away with woolly mammoth ivory!

The passenger steamer SS Warrimoo was quietly knifing its way through the waters of the mid-Pacific on its way from Vancouver to Australia. The navigator had just finished working out a star fix and brought Captain John DS. Phillips, the result. The Warrimoo’s position was LAT 0º 31′ N and LONG 179 30′ W. The date was 31 December 1899. “Know what this means?” First Mate Payton broke in, “We’re only a few miles from the intersection of the Equator and the International Date Line”. Captain Phillips was prankish enough to take full advantage of the opportunity for achieving the navigational freak of a lifetime. He called his navigators to the bridge to check & double check the ship’s position. He changed course slightly so as to bear directly on his mark. Then he adjusted the engine speed. The calm weather & clear night worked in his favor. At mid-night the SS Warrimoo lay on the Equator at exactly the point where it crossed the International Date Line! The consequences of this bizarre position were many:
The forward part (bow) of the ship was in the Southern Hemisphere & in the middle of summer.
The rear (stern) was in the Northern Hemisphere & in the middle of winter.
The date in the aft part of the ship was 31 December 1899.
In the bow (forward) part it was 1 January 1900.
This ship was therefore not only in:
Two different days,
Two different months,
Two different years,
Two different seasons
But in two different centuries – all at the same time!

What is John Wayne aiming at? 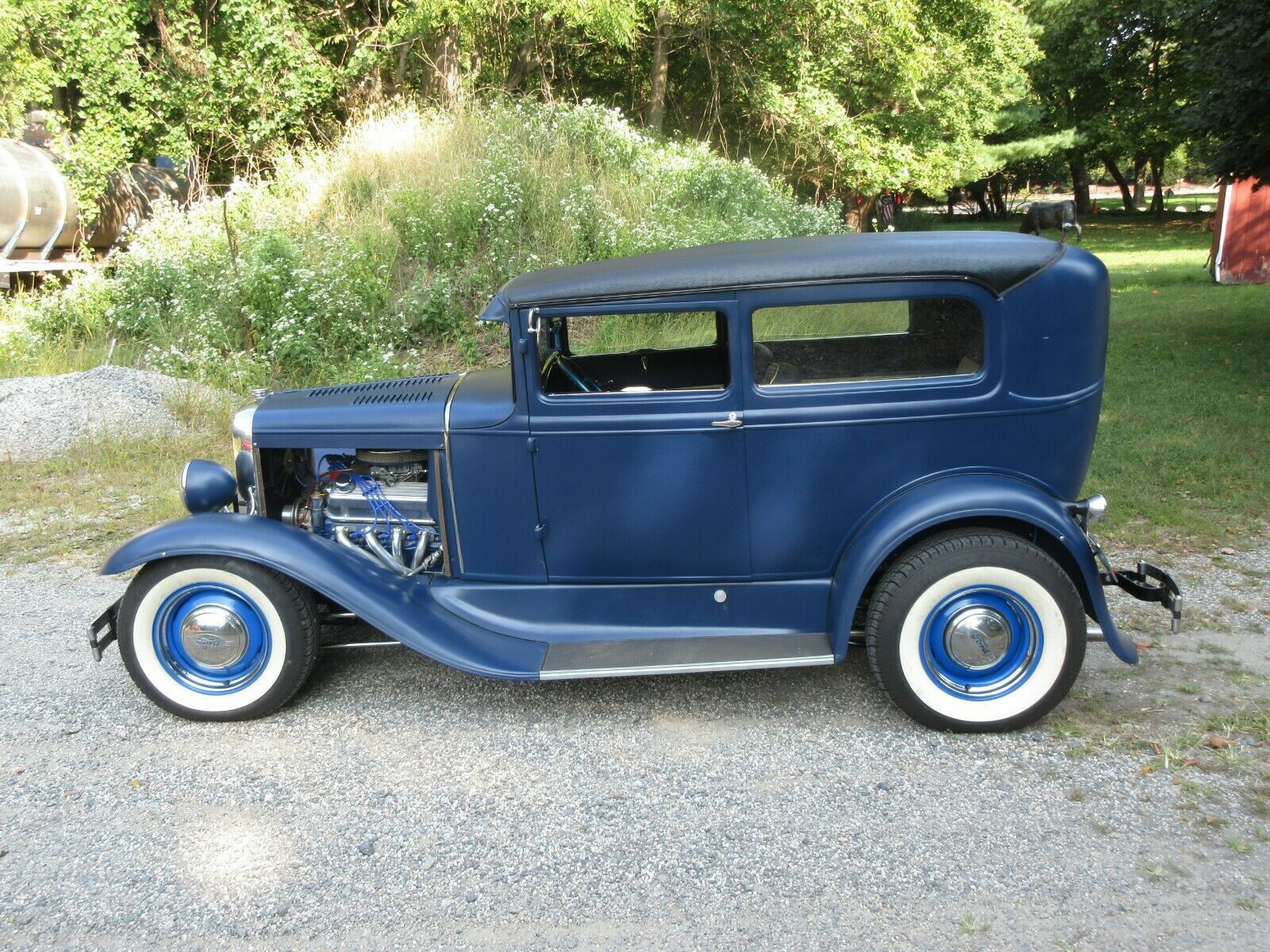 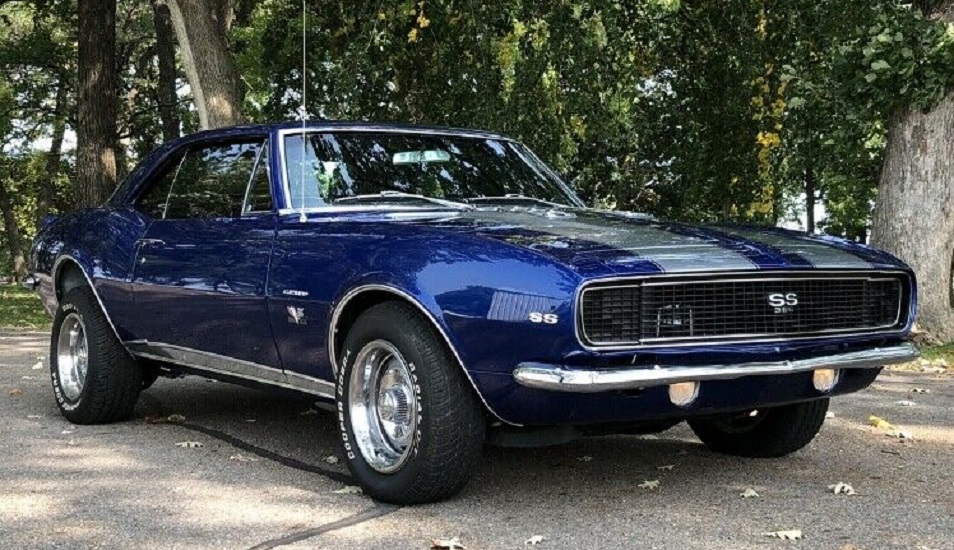 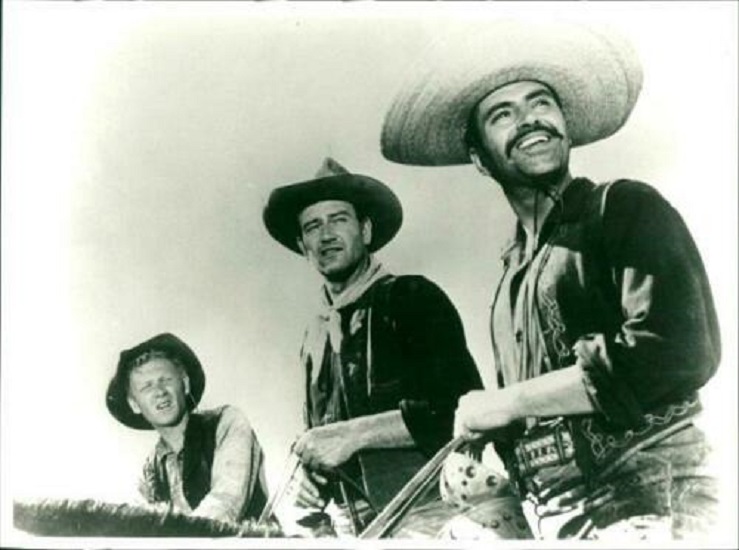 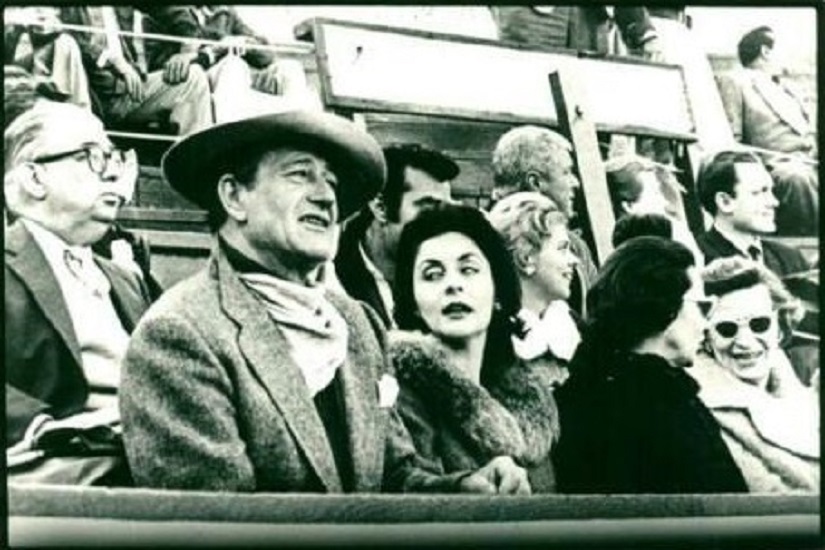 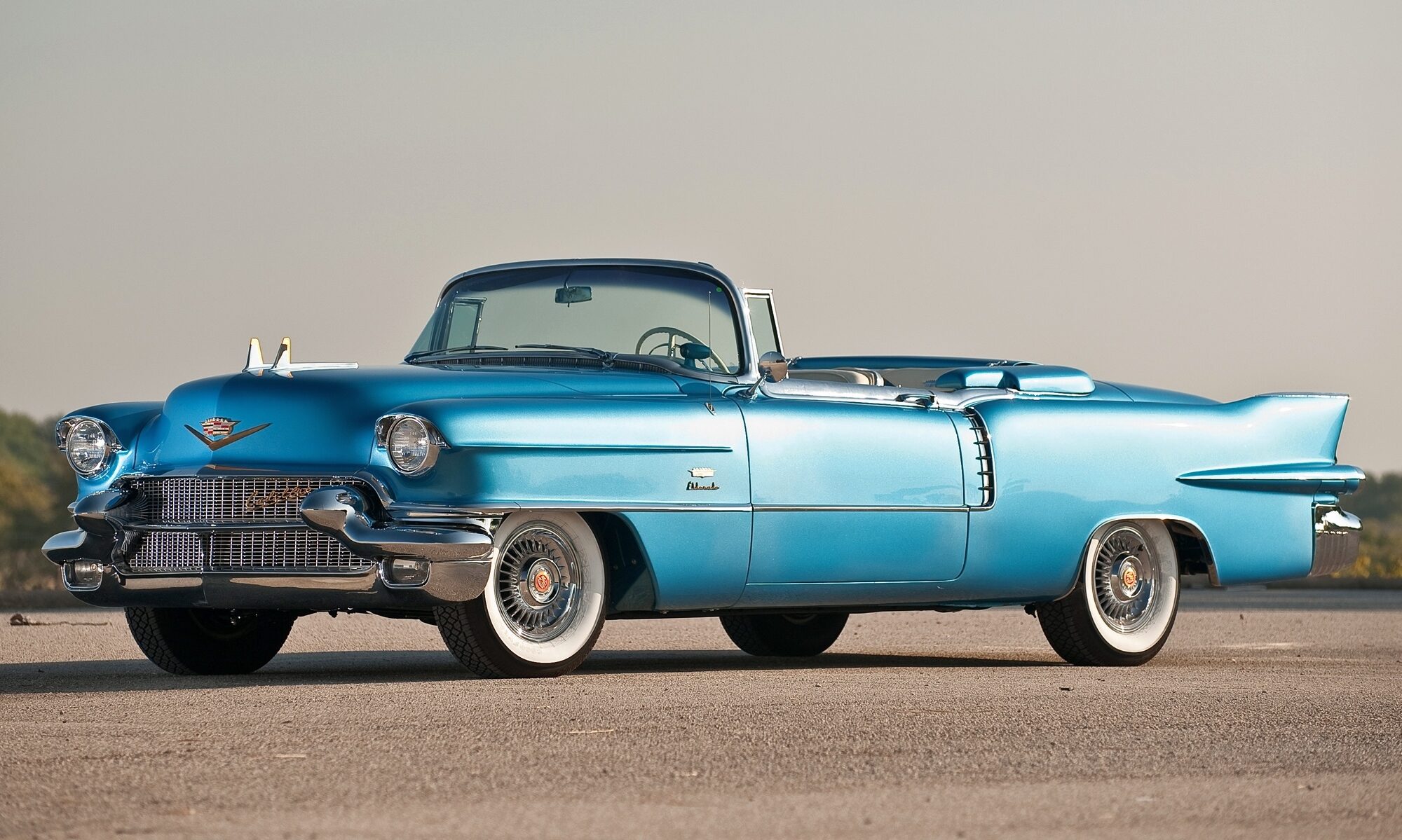 An Exquisite specimen of the Classic Cadillac Eldorado.

Cadillac began the 1950s with carefully considered updates to its basic 1948 design, which was good enough to remain popular through 1953. As General Motors designer Mitchell once noted: “A traditional look is always preserved. If a grille is changed, the tail end is left alone; if a fin is changed, the grille is not monkeyed with.”

And so it was: a new one-piece windshield and revamped grille for 1950, small auxiliary grilles beneath the headlamps for 1951, a winged badge in that spot for 1952, one-piece rear windows and suggestive “Dagmar” pointed front bumper guards for 1953. Equally wise, Cadillac gave up on fastbacks much earlier than sister GM makes, switching all of its 1950 coupes to notchback profiles with hardtop rooflines a la Coupe de Ville.

Models also didn’t change much through 1953. Still accounting for most sales, the Series 62 offered a four-door sedan, convertible, Coupe de Ville, and a less-deluxe hardtop coupe, all on the usual 126-inch wheelbase.

The Cadillac Sixty Special remained a solitary super-luxury four-door on its own wheelbase, which was now 130 inches versus 133 for 1942-1948. The Series 75 still listed its customary array of limousines and long-wheelbase sedans on a 146.8-inch chassis. Cadillac also continued supplying chassis for various coachbuilders, averaging about 2,000 a year through 1959.

The “entry-level” Series 61 was still around in 1950, but its sedan and De Ville-inspired coupe were demoted to a 122-inch wheelbase (from 126 in the 1940s). Manual transmission remained standard here (and on 75s), but other Caddys now came with Hydra-Matic at no extra cost.

The Series 61 models still lacked chrome rocker moldings and had plainer interiors, but also lower prices (by about $575). But with record 1950 sales of 100,000-plus, Cadillac no longer needed a “price leader,” so the Series 61 was cancelled after 1951, this time for good.

After observing its Golden Anniversary with a little-changed fleet for 1952, Cadillac issued a flashy limited-edition convertible, the 1953 Series 62 Eldorado. Like that year’s new Buick Skylark and Olds 98 Fiesta, it boasted features previewed on recent GM Motorama show cars: custom interior, special cut-down “Panoramic” wraparound windshield, a sporty “notched” beltline (below the side windows), and a metal lid instead of a canvas boot to cover the lowered top. A striking piece, the Eldorado was a preview of Cadillacs to come, but only 532 of the ’53s were built, largely because the price was a towering $7,750. 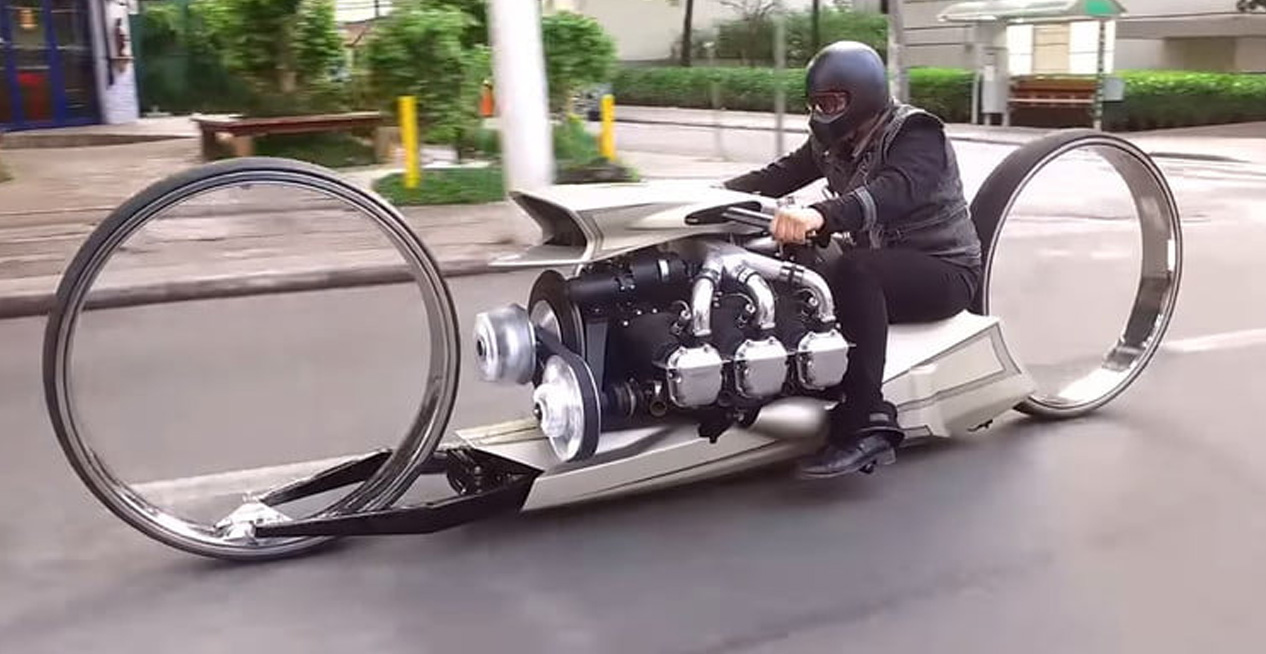 The TMC Dumont might just be the coolest motorcycle ever – and it really has to be seen to be believed.

The futuristic beast may look like something that came straight out of Tron or The Fifth Element, but it’s legit, and even though it’s officially just a concept, it’s a pretty impressive piece of engineering.

There’s so much going on with this bike that it’s hard to know where to begin. For starters, the wheels are just about as stripped-down as it gets; they’ve got 36in rims, they’re basically spokeless, and the tires sit so close to the ground that it looks like the driver is risking some major friction burns if he comes across a speedbump.

Luckily, the guy who created the Dumont just so happens to also be a Formula One racing driver, so he’s pretty used to driving by the seat of his pants.

Tarso Marques, who has spent much of his post-F1 life creating similarly crazy concept motorcycles, took seven months to build the TMC Dumont before showcasing it at the 2018 Daytona Beach Week Bike Show, where it won Best in Show.

Rather than settle for a 500cc engine, Marques has also taken the absolutely insane step of picking up an actual airplane engine to power his ride. Yep, that’s an actual retro 1960s Rolls Royce V6 he’s sitting behind, and it makes some serious noise.

Marques says it took him 15 years to source the perfect engine for the bike, ‘The TMC Dumont deserved something really unique and powerful, and with a great sound and look. A normal motor would be so boring.’

Marques isn’t the first petrolhead to stick an aircraft engine under the hood. Jay Leno famously switched the engine in his 1934 Rolls Royce out for a Merlin V12 – the Rolls-Royce engine originally used to power Spitfires in World War Two.

The TMS Dumont is named after Alberto Santos-Dumont, an aviation pioneer from Marques’s native Brazil.

It’s fair to say bloggers were pretty impressed – if not a bit confused – by the bike. ‘It’s impractical, it’s ambitious, and I think it’s awesome to see a crazy concept brought to life and actually ridden,’ read one review.

Sure, no one is entirely sure how this thing actually works, but let’s not get caught up in the technicalities here. 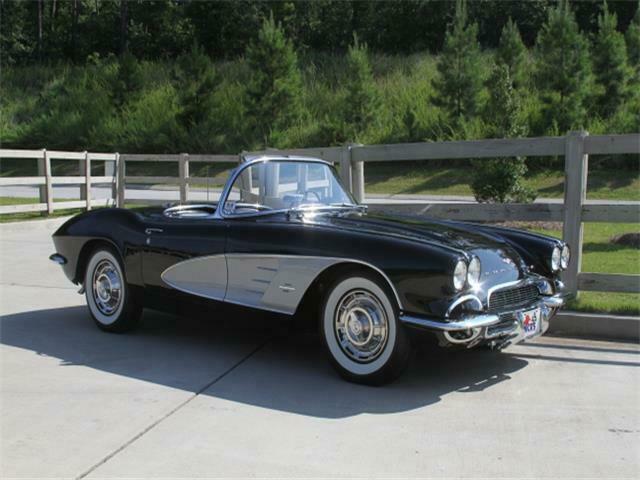 Once upon a time, just a few years ago, owners of America’s only sports car were on the receiving end of constant gibes from the “sporty car set,” which held that the only thing the beast had to offer was drag strip performance. It would go like the wind (in a straight line, they said), but it wouldn’t corner, it wouldn’t stop, it had a boulevard ride, and a glass body. And it took 265 cu in. (4.5 liters) to get that performance.

Well, these derogatory remarks probably were true at one time. At least, some of them were. But engineers have now achieved an excellent package, combining acceleration, stopping power, a good ride and handling characteristics whose adequacy is indicated by the car’s race-winning ways.

In our January 1959 test report of the 1959 we said the 1960 would be the year for the big changes in the Corvette. We were wrong. The 1960 model wasn’t too much different from, or too much better than, the 1959 version. Lacking any great changes in 1960, we might logically have predicted a major change in 1961, but luckily we didn’t.

However, the few changes which have been made are for the better. Continual refinements since 1954 have made the Corvette into a sports car for which no owner need make excuses. It goes, it stops, and it corners.

The major change in the appearance is the rear end treatment, which was derived from the Sting Ray, GM racing Corvette, owned by Bill Mitchell. The stubbier look achieves a more crisp and a fleeter appearance than that of previous models, which looked “soft.” The front end remains basically unchanged. New bumpers fore and aft blend nicely into the body design, and the exhaust tips are now under the body instead of through the bumper tips. This was a good move; there’s no mistaking the Corvette for any other make and it is a better looking car now.

The finish of the fiberglass body is generally excellent, although we did find a few minor flaws on our test car, mostly in obscure places. Panel fit and fairing from one panel to another were good and showed Chevrolet’s great attention to the Corvette molds.

Interior trim and design are similar to past models and well done, but have a little of the Motorama touch. The seats are excellently designed and are very comfortable. Our longest single excursion was of some 200 miles, but no sign of driver fatigue was evident and we honestly feel a day behind the wheel of a Corvette could be put in without undue strain.

The instruments are easy to read and include a speedometer, tach (reading to 7000 rpm — red-lined at 6200), gas gauge, temperature gauge, oil pressure gauge and ammeter. Indicator lights are used for the turn signals, high headlight beam and parking brake. The parking brake light on the panel lights up when the key is turned on (if, of course, the parking brake is on) and when the engine is started the light blinks its warning to the driver. The only fixture in the Corvette interior that’s hard to use is the radio, which is mounted in a console deep under the instrument panel. This console also carries the clock, which is difficult to see and should be looked at only when the car is stopped.

The seats have 3 in. of fore and aft movement, which gave everyone on our staff adequate leg room, but the body panel between the seats interferes with the driver’s elbow (when shifting) when the seat is at its rearmost position.