The Beatles “Four Aces” program large set of autographs boldly signed on the opening photo page of the group by John Lennon, George Harrison, Ringo Starr and Paul McCartney who has added a dedication “To Michelle Love from The Beatles”.
Now here’s where it gets real interesting.
This is a pen pal story….Once upon a time, way before the internet and Facebook people use to send letters to one another and some (mostly teenagers) through school and magazines made friends and wrote to one another through the mail.


This signed program comes from one such pen pal friendship that started in the early 60’s, between two teenage girls, one living in Pennsylvania in the United States and the other living in Bradford England.
Here’s just part (edited) of the two page hand written letter of provenance that come with this signed Beatles program: “Sometime ago I found myself corresponding with a peer of my own age, but from quite far aways. Somehow I connected with Diane (British pen pal) and we became pen pals. Her name was Diane (last name edited out by me) and she lived at two Stevenson Street, Bradford Yorkshire England.
We wrote about stuff fifteen and sixteen year olds write about and writing about how one day we would meet. At some point Diane started writing about this group of musicians who were becoming very popular in England. She sent me newspaper clippings and other print media which I kept in a scrapbook. But the biggest treasure arrived in the form of a program.
Diane’s father was a stage hand or security guard at a theatre where the Beatles were performing, she asked him if he would get the “Fab Four” to sign it which they did. She then sent it to me, along with her signature (see page opposite Beatle signatures), which to me was just as special” Signed Michelle
Diane wrote on the opposite page “To Michelle love from Diane. (I thought you’d like my autograph too”
Now here’s where it gets even more interesting….If you look at the tour dates of this Beatles fall tour with Mary Wells etc. you will see that on October 9th 1964,which was the opening night of their fall tour, where they played two shows at the Gaumont Cinema in Bradford….Most Beatles signed items out there can’t be traced to a specific date and place…This is….Also what’s also extra special here is that this program was signed by John on his 24th birthday, which of course was October 9th.
This is truly a unique piece of Beatles history and a remarkable set of signatures.
The program itself is intact and the signed Beatles page measures 8″ X 10 1/2″ (over sized set of signatures) and the page is in Excellent+ with slight tear and vertical fold not really affecting the autographs. The page is remarkably clean and free of any fading, pitting or soiling. 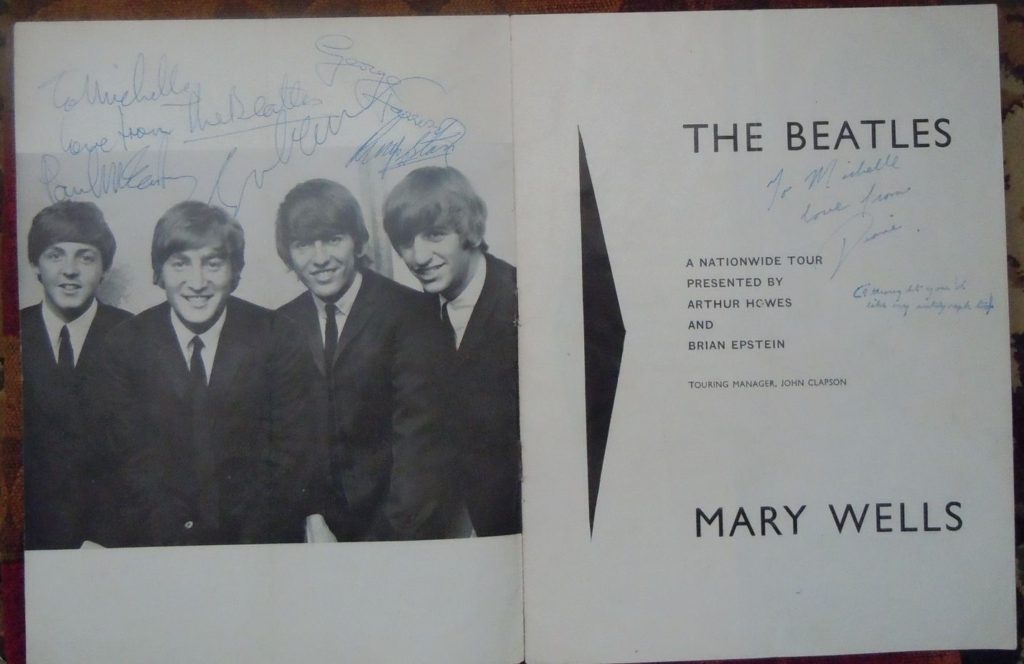