At an elevation of 6,398 feet, the peak itself isn’t visible until about three miles up the Pioneer Ridge Trail.  A magnificent summit that looms over the Matanuska-Susitna Borough, Pioneer Peak is one of the more accessible 6,000-foot-plus peaks in the Chugach Mountains.  The name was given in 1939 in honor of the pioneers of the Matanuska agricultural colony of the mid-1930s.

Mount Redoubt on the Kenai Peninsula Alaska.  One of Alaska’s most recently active volcanoes, Mount Redoubt has been known to provoke debris avalanches down to the shores of Cook Inlet and sprinkle ash as far away as Denali National Park. This dramatic peak lies amid one of the state’s plentiful scenic regions, a place of snow-capped volcanoes and sparkling ocean bays.  Mount Redoubt lies in the Chigmit Mountains (part of the Aleutian Range) along the western shore of the Cook Inlet, an arm of the Gulf of Alaska, in Lake Clark National Park and Preserve. The peak is roughly 100 miles southwest of Anchorage, Alaska’s biggest city, which sits near the head of Cook Inlet.  The volcano rears about 10,200 feet above sea level, making it the highest peak in the Aleutian Range. The Smithsonian Institution’s Global Volcanism Program suggests Redoubt is at close to 900,000 years old, built atop a much older granite foundation. 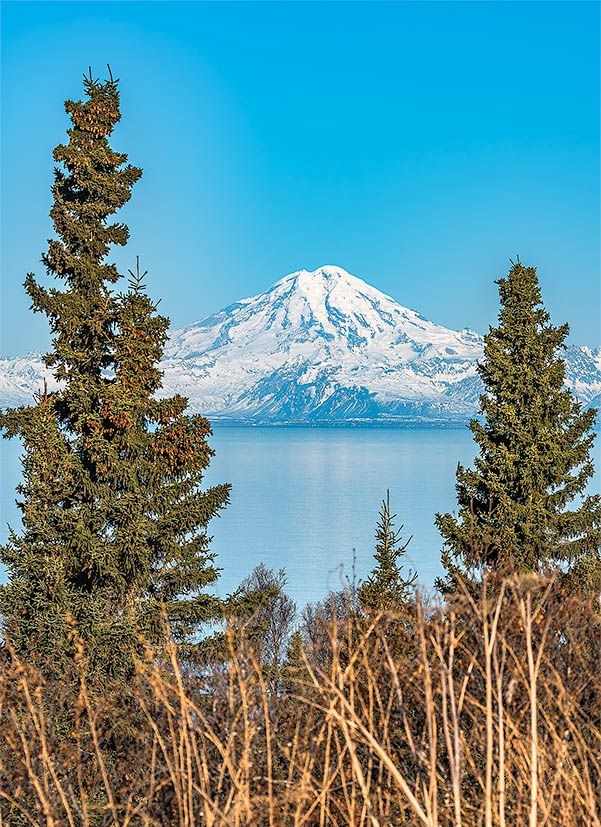