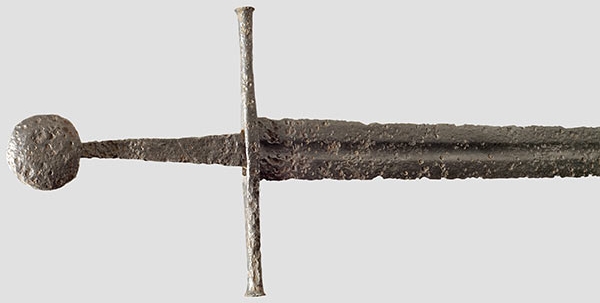 Little is known of Jean d’Alluye’s life. He belonged to the nobility of central France and he traveled to the Holy Land as a crusader in 1241 coming home three years later, 1244. Given that it will have taken him many months to get to Outremer and many months to return this was a relatively brief sojourn: certainly he wasn’t among the grizzled Norman psychos who went native.  c. 1248 he died and was buried at La Clarte-Dieu were he was put under a beautiful limestone giant. These fragments of biography have not particularly excited historians and his gravestone did not particularly excite the French: after the revolution his tomb was sacked and the gravestone was eventually thrown across a river as an improvised bridge. It was though rescued and in 1910 sold to an American – in remarkably good form – and was brought to the United States and now resides in the Cloisters Collection. And it was there that Jean finally became something more than just another sculpture. Helmut Nickel, a stalwart of the Met and a fine medieval historian noticed something strange. Jean’s sculpted sword looked wrong.

The problem was the pommel. European swords of this era and, indeed, Arab swords (whose rate of survival is, incidentally far slighter) had a round bulb at the top (see below). The pommel, instead, looks tripartite, even flowering. Nickel was intrigued and, in a short article, in 1991 suggested that this was a Chinese sword! W-wh-what?! But how could a Chinese sword have made it all the way to central France? Well, the connection is not absolutely incredible. The Silk Road continued to bring goods backwards and forwards and Jean had, after all, got a quarter of the way to China when he crossed the Mediterranean to Christian Palestine. Perhaps it was the spoil of battle, ripped from the dying hands of a Syrian warrior, or perhaps it was traded with a Chinese visitor in the merchant quarter in Jerusalem.

Or perhaps it wasn’t Chinese at all and we can recover some historical sanity. There are two points that have to be brought up against Nickel’s theory. First, this is not the sword but a representation of a sword. Is it possible that the artist rendered the sword in a curious fashion for his own reasons: perhaps even correcting a mistake in attempting to sculpt a conventional pommel? Second, there are other possible sources. Some early medieval European swords have non-round pommels: we show a selection of Viking swords below.

Is it possible that Alluye’s family had an heirloom that, though not used in battle, was carried through the generations in a ceremonial fashion? Memories of a long lived Viking sword from the north…Nickel was a WANW expert though so I would be very wary before going against his considered judgement. Any oriental specialists who can contribute. Drbeachcombing AT yahoo DOT com And just to round things off… Medieval Chinese swords don’t survive apparently, but there are many images available.

Feb 2014: JH and MC both make the case, in almost identical words, that this is the fleur de lys: the symbol of France. If so it would be unprecedented but then Chinese swords weren’t that common on the Loire either…. Thanks guys!

Dan FitzEdward from Normannis writes in ‘Just been linked by a friend to your article, and there’s a few things that may interest you.
Firstly, your article refers to medieval pommels as uniformly a single round design. Whilst this was the predominant fashion in the 12th-13th centuries, there are many pictorial and extant examples of different designs- interestingly this example, on the Trinity Apocalypse (which is contemporary to the funery effigy) shows a three-lobed sword pommel in roughly the same style- .

We might, however, assume a possible foreign origin- the sword has an uncharacteristically short and curved cross, with lobed endings- which in overall form seems quite rare for the West. If we do assume a foreign origin, we don’t need to look as far a field as China, however.

The supposedly ‘oriental’ design would match images of swords from Byzantium–  (look at the last two examples on the right).

Given the Fourth Crusade and the sack of Byzantium by ‘Latin’ (French and Italian) forces in 1204, with loot taken wholesale back to the West, it is not a huge leap of belief to believe that a Byzantine sword could have been taken as a trophy and depicted on a tomb.

Thanks a million Dan!18 Jun 2017 Chris R writes. The crux of the observation — whether its Chinese, Viking or French — was to look at the sword’s pommel then try to argue whose style is that.This really isn’t were you need to be looking at. Instead, it should be at the hand guard. No European sword has this kind of hand guard.  Not ever. Take a look at this replica Chinese Jian.